The Uist Arts Association (UAA) Summer Exhibition will run from 7th July until the 13th August 2018 at Taigh Chearsabhagh. I have submitted a couple of pieces to the exhibition. 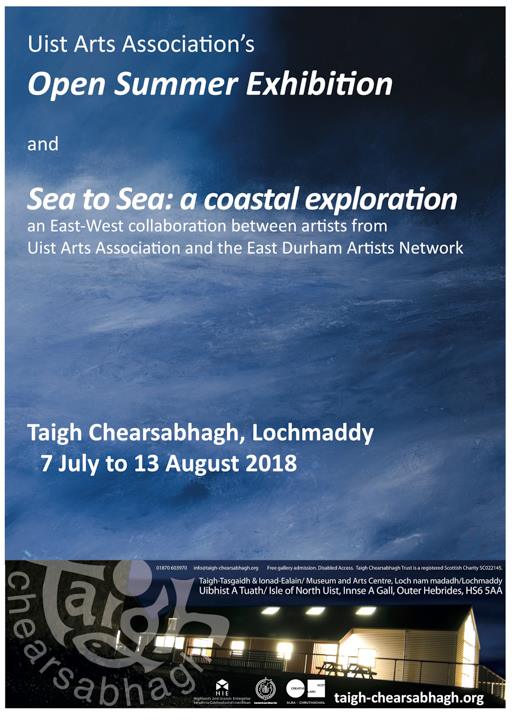 Thank you to all customers who purchased from Jane and myself at the exhibition at Callanish this year. We were phenomenally busy during the month – there have been many more tourists visiting our beautiful islands during May this year. At times we were hard pushed to keep up our stock levels and it was lovely to have a constant stream of visitors through the door. I so much enjoy chatting with people, both locals and visitors.

Tuesday afternoon’s saw the return of my regular (while in Lewis!) crochet classes – ladies returned who i’d taught last year plus I taught some new ladies. The intermediate ladies tackled “Corner to corner,” “Making Coasters,” “Making fingerless Mitts” and in the final week “Tunisian Crochet.” A great time crocheting, chatting, drinking coffee and eating cake was had by all 🙂

I have left three framed prints up in Lewis which should, by now, have been delivered to An Lanntair for inclusion in the “Grinneas nan Eilean” exhibition which will take place at An Lanntair from 17th June to 29th July 2017. 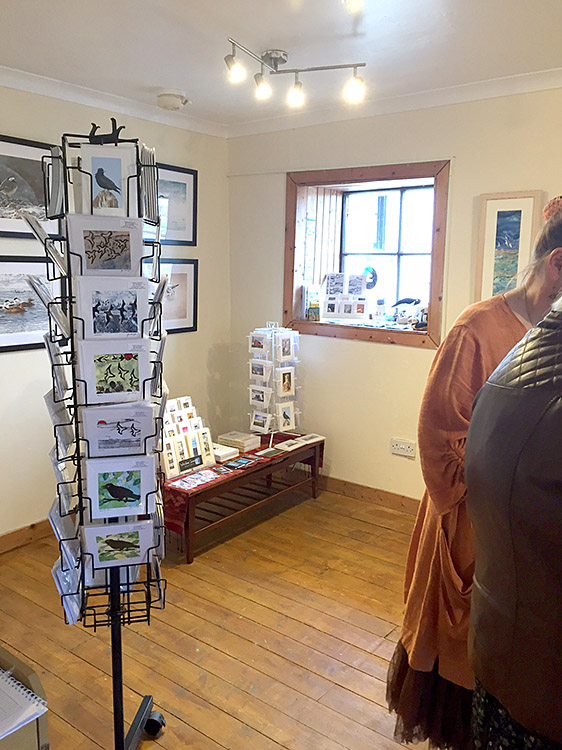 All set up and ready to go on our preview evening. 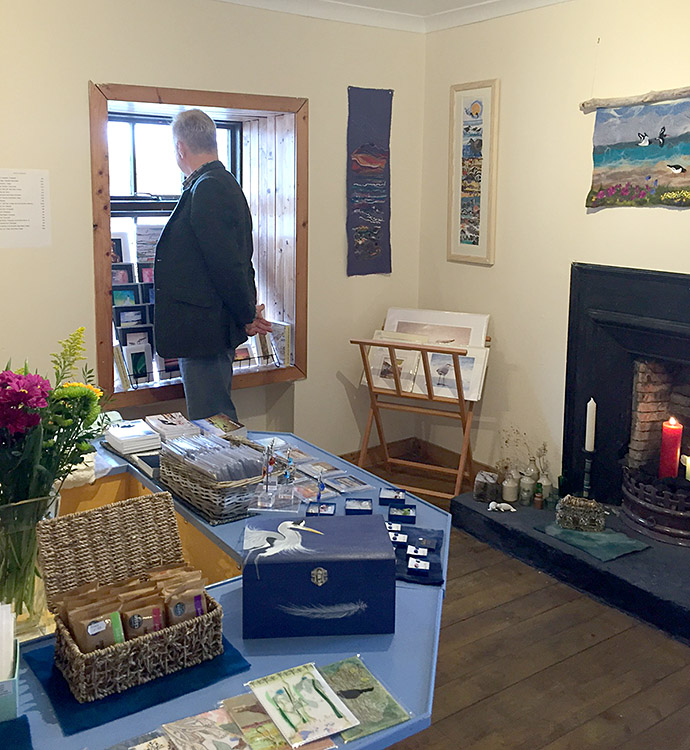 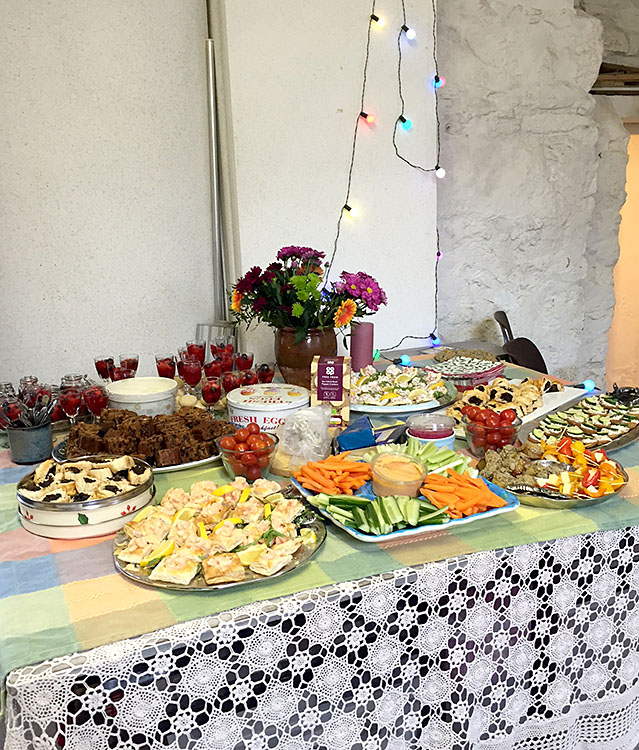 As always Sharon (helped by Julie) did us proud with a fabulous Hebridean themed spread for the preview evening.

Phew, well, i’m back from my lovely relaxing break – Texas was very hot and humid compared with the Outer Hebrides (it’s the 24th April today and it’s snowing outside!!).

I’m now running around (headless chicken comes to mind…) getting everything ready as I head up to the Isle of Lewis on Wednesday to make last minute preparations for the exhibition at Callanish which opens officially on Monday 1st May, with a preview evening on Saturday 29th April, 7pm at the Steading, next to the Callanish Visitor Centre, feel free to drop by.

Well, I arrived back in Uist late on Friday evening. Orders received via my website during my holiday have been dispatched via first class mail today – apologies for the delay – thanks for your patience ladies and gents

Had a fabulous end of season break. Managed two full day printmaking workshops with the fabulous Jenny Gunning at Shropshire Fine Art in Ironbridge. I hope to do two more next time i’m down visiting family. While I was in Norfolk I did a two day art course with Steve Cale which was very enjoyable.

Went to the private view of the NOA exhibition and it was great to see my photo “The Way” hung with all the fabulous art. Even better I sold the framed print and two un-mounted prints, with another order being received as well – only 5 of the edition of 10 left now.

Yay! Further to my previous post, I just received this email – the results of the second round of judging for the National Open Art Exhibition.

We are delighted to inform you that your your submission “The Way” has been selected for the 20th National Open Art Exhibition!

The 20th National Open Art Exhibition is held in the heart of The City of London at Mercers’ Hall. The Mercers’ Company is the Premier Livery Company of the City of London. The Exhibition will take place from the 27 October – 4 November with Free Admission.

Happily these dates coincide with my trip to the mainland so i’ve accepted the invitation for the private viewing on the 29th October – it will only be my third time in London in 30 years!

Well! What a month May was. I’ve now returned home, exhausted after a really busy month. I headed up to the Isle of Lewis on the 28th of April, neither Jane (Blue Pig Studio) nor I were totally ready for the exhibition at The Farmhouse, Callanish Visitor Centre, so the midnight oil was burnt on the 28th and 29th. Thankfully everything was done, ready and in situ for the preview evening on Saturday 30th April. Our Spanish-themed evening went really well and over thirty people came.

Considering that the theme of our joint exhibition “Walk this Way” was about our experiences walking the Camino de Santiago it was very well received. Over the month we had a lot of people through the door who had either walked the Camino or were thinking of walking – it was nice that our exhibition acted as a catalyst and a number of people have now finally made their decision to walk.

Jane ran regular workshops and I ran an “Improve Your Photography” workshop, a gelli plate printing workshop and every Friday afternoon during May I ran a drop-in crochet group – I taught 5 people how to crochet at the very first afternoon – yay!

My camino postcards were very popular – The Way in particular – so much so that I had to get more printed part way through the exhibition!

My journal from the first time that I walked the camino in 2013 evoked many emotions in people from laughter to tears – I ran the same gauntlet of emotions whilst putting it together. The general consensus seemed to be that I should find a way of publishing it so I may look into that. I enjoyed being able to share my experiences with people.

Created for the preview evening party by super cook and caterer Sharon Borton! You can tell how good it tasted by how little was left over!

We had many people come in who had seen the sign and exclaimed “I knew it must be about the Camino!”

Now I’m back, and my studio at home is open from today (1st June until late September) – I’m still not fully set up but should be by opening time tomorrow. Then there is the small matter of finishing sorting out the 3000 photos I took in Spain! I’m happy to say that I’m still being Creative Every Day – if it’s not art it’s photography or crochet 🙂

Come to visit our joint exhibition (Blue Pig Studio and Hebridean Imaging). For the whole of May we will be at The Farmhouse, next to Callanish Visitor Centre, Isle of Lewis. The exhibition provides some insights into our Camino de Santiago experiences including sketchbooks, journals and found objects. We will also be having a variety of art, photography and crochet/knitting workshops and drop ins – I’ll post details as soon as I can. Will be delighted to see you!

I’m having a joint exhibition with a friend next May, our theme is “Walk this Way” about our experiences walking the Camino de Santiago. I’m writing up my diary from when I walked the Camino de Santiago in 2013. Each of the 44 pages represents one day of the 500 mile walk and includes a variety of writing, photographs, sketches that I did at the time, things I collected along “the way.” Central to each day is my “colours of the Camino” gelli print, done with my 8 inch circular gelli plate.

My “Journey Book” will be available at the exhibition for people to look through. I will also be incorporating “gelli elements” into the art for the exhibition too. It’s no good, there’s no hope, I’ve been a hopeless gelli addict for 12 months now.

Having recently returned from the Camino de Santiago, The Farmhouse at the Callanish Stones Visitor Centre, Isle of Lewis is booked for the whole of May and a joint exhibition will take place with Jane Harlington of the Blue Pig Studio. The exhibition will be focused on the theme of undertaking a journey – let’s face it we have many journeys during our lives. There will also be a variety of workshops taking place throughout the duration of the exhibition where you can come along and try out new techniques. So watch this space!

I’m currently working on a few pieces, one of which is my “journey book” from my first Camino in 2013 and will cover the 44 days of my travels, on foot, during that time. The journey book will be available for viewing during the exhibition. I’m also developing some photographic prints, artwork and cards based on my walks in 2013 and 2015.

Here is just one of the items i’ve been working on – a lino cut multi-media piece called “Lauburu” The lauburu is the symbol of the Basque country and is seen frequently throughout the the first part of the 500 mile walk.

I don’t have much opportunity here in the Outer Hebrides for visiting art exhibitons, I have a trip up to the Isle of Lewis every couple of months to visit friends and always call in to An Lanntair in Stornoway – they generally have two exhibitions running, one in the main gallery space and one upstairs in the cafe/bar. As I’m unable to pick and choose what to visit I just take pot luck and visit anyway, I had vaguely heard that the latest exhibition was about birds but I didn’t have any details. Tumadh: Immersion was set up in the main gallery, one of the entrances was closed off just leaving a single entrance and the lights had been dimmed. Three walls at the far end of the space had screens in a variety of sizes set up on the walls in a seemingly random order. On each screen a different video was showing, the common theme being a seabird colony. Footage was a whole variety of shots from general views of the cliffs to much more intimate scenes of a single egg hatching, Fulmars pair bonding and single birds sitting on their nests. There were no natural sounds to go with the footage but there was a soundtrack which complemented the exhibition very well. I thought that the way the display had been set out was well thought out and the screens were on on and had ledges. I made a sketch of some of the screens.

Just as watching a seabird colony for real there was a great sense of enjoyment in sitting and watching and just being there to witness the spectacle, not really knowing where to look next as the screens were constantly changing – one minute it would be a view from the top of a cliff of a White-tailed Sea Eagle drifting over the rocks looking for prey and the next it would be wildflowers swaying in the breeze, followed by row upon row of squabbling auks. I found it like a real colony, endlessly active and fascinating. Of the quieter moments the footage of a Fulmar turning it’s single egg, placed in a nest scaped out on three or four inches of a sheer cliff gave a sense of the fragility of the whole colony. I also felt a sense of sadness because these colonies, so fragile on the edge of the ocean, are under threat, something that we could lose for a variety of reasons – global warming and over-fishing.

Between 1985 and 1990, the sandeel stock around Shetland collapsed, leading to successive years of breeding failures of Arctic Terns, Arctic Skuas, Great Skuas, Black-legged Kittiwakes and Atlantic Puffins. Since then, sandeel availability and breeding success has fluctuated. (Mitchell et al, 2004)

On discussing the exhibition afterwards with a friend they asked “is that art then?” and my considered response was, well, yes if art is supposed to make you think about a subject, ask questions and invoke an emotional response then yes it was art. The artist’s statement from their website  says

Our work explores mankind’s relationship with nature and how we interact with the ecology of the earth.

And I think that with Tumadh: Immersion they fulfilled that remit very well.

Buy Me a Coffee